• both feet have to be on the ground and may not be lifted during the attempt
• the derriere has to rest on the bank and may not be lifted
• the dumbbell may be put out by an assistant
• the attempt is enabled by the referee with the signal "start", if the contestant holds the dumbbell controlled and with arms through-stretched
• the competitor lowers the dumbbell controlledly to his chest, touches it and holds it for 1 second in this position
• if the referee gives the "press" signal, the athlete pushes the weight evenly upwards until his arms are stretched through
• then, the referee gives the signal "rack" and ends the attempt through this
• the hands have to surround the dumbbell completely; the thumbs have to be around the dumbbell
• each competitor has 3 attempts, the best one is taken into account

• the competitor grasps the dumbbell bar that lies in front of him with both hands and lifts it in one go and without a break until his body is fully stretched; meanwhile, the position of his feet may not change
• the referee ends the attempt with the signal "down" if the competitor lays the dumbbell controlled on the ground, while both of his hands touch it
• each competitor has 3 attempts, the best one is taken into account

• customary powerlifting resp. weightlifting belts
• wrist bandages
• weightlifting suits or bench-press singlets which fit tightly
• thermobandages for the knee area which can be pulled over -> NO wrapbandages

WARNING! All equipment must be authorized before the competition from the technical director. 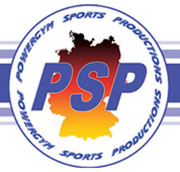 Here could be your advertisement!